Billie Eilish
Billie Eilish Pirate Baird O'Connell is an American singer-songwriter. She first gained public attention in 2015 with her debut single "Ocean Eyes", which was subsequently released by Darkroom, an imprint of Interscope Records. It was written and produced by her brother, Finneas O'Connell, with whom she frequently collaborates on music and in live shows. Her commercially successful debut extended play Don't Smile at Me charted in the top 15 in numerous countries, including the US, UK, Canada, and Australia. Eilish's first studio album, When We All Fall Asleep, Where Do We Go?, debuted atop the US Billboard 200 and UK Albums Chart. It was one of the best-selling albums of 2019, buoyed by the success of its fifth single, "Bad Guy", Eilish's first number-one on the US Billboard Hot 100. The following year, she co-wrote and performed the theme song "No Time to Die" for the James Bond film of the same name, which topped the UK Singles Chart and won the Academy Award for Best Original Song in 2022. From Wikipedia (https://en.wikipedia.org/wiki/Billie_Eilish) under Creative Commons Attribution CC-BY-SA 3.0 (http://creativecommons.org/licenses/by-sa/3.0/legalcode)
Show More
1

Happier Than Ever E
Billie Eilish
3

when the party's over
Billie Eilish
5

when the party's over Billie Eilish • 792M views 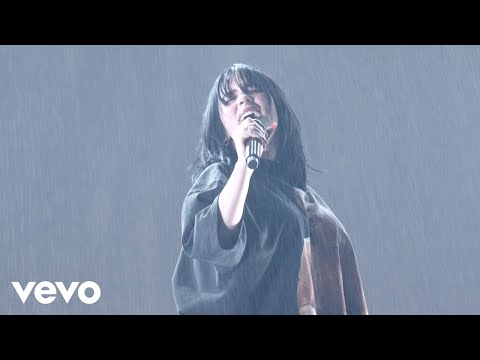